Last year, working with Luke Halls Studio, I was lucky enough to produce some backdrops for the Sam Mendes-directed play The Lehman Trilogy at the National Theatre, London. The play charts the progress of the Lehman Brothers from rural beginnings to the dizzying heights of 1980s disaster capitalism through the prism of a family drama.

Es Devlin's glass-office set design meant that a projected-video cyclorama was visible at rear of stage for the entire duration, and the fact that this was a curved backdrop afforded the audience a unique perspective depending on where they sat. These backdrops were to depict a burgeoning New York City, starting in 1844, when Lower Manhattan was little taller than a church spire, through to the 1930s, when the Chrysler Building loomed large over midtown Manhattan. As so often happens, we had hardly the time to produce what we'd envisioned, nor had I time to really get my head around what was required to tell the story. I sorely wanted to revisit the project, and we knew we could push it further. In early 2019, the show was shipped to its spiritual home of NYC's Armory theatre, and so we finally got that chance.

Our initial response, in 2018, had been to try to accurately convey the kind of evolution from industrial coastal town to towering capital. It's telling that in trying to design a narrative using a concrete (ahem) place in reality, it is easy to become blinkered, detail-obsessed, and less narrative-focussed. Just optimising and retexturing the assets alone could have taken a month, and there was a lot of fudging required to get the renders looking good. The director wasn't satisfied that we had a handle on the narrative, and suggested that the city itself is a gradually-revealed, mystical figure of its own. With that feedback, I spent an afternoon in Octane and produced this image, which Sam seemed very happy with. By the way, I sent this over with no post whatsoever.

We sent the above image to Sam Mendes, and his approval of this approach meant that we had a far more mystical, beautiful tangent to the representation of the city, rather than accurately trying to recreate New York over the span of 60 years of dramatic growth. The image of the Statue of Liberty, alone in the world, isolated in a vast, misty expanse, became the hallmark of our visual response, and set the tone for the rest of my renders. 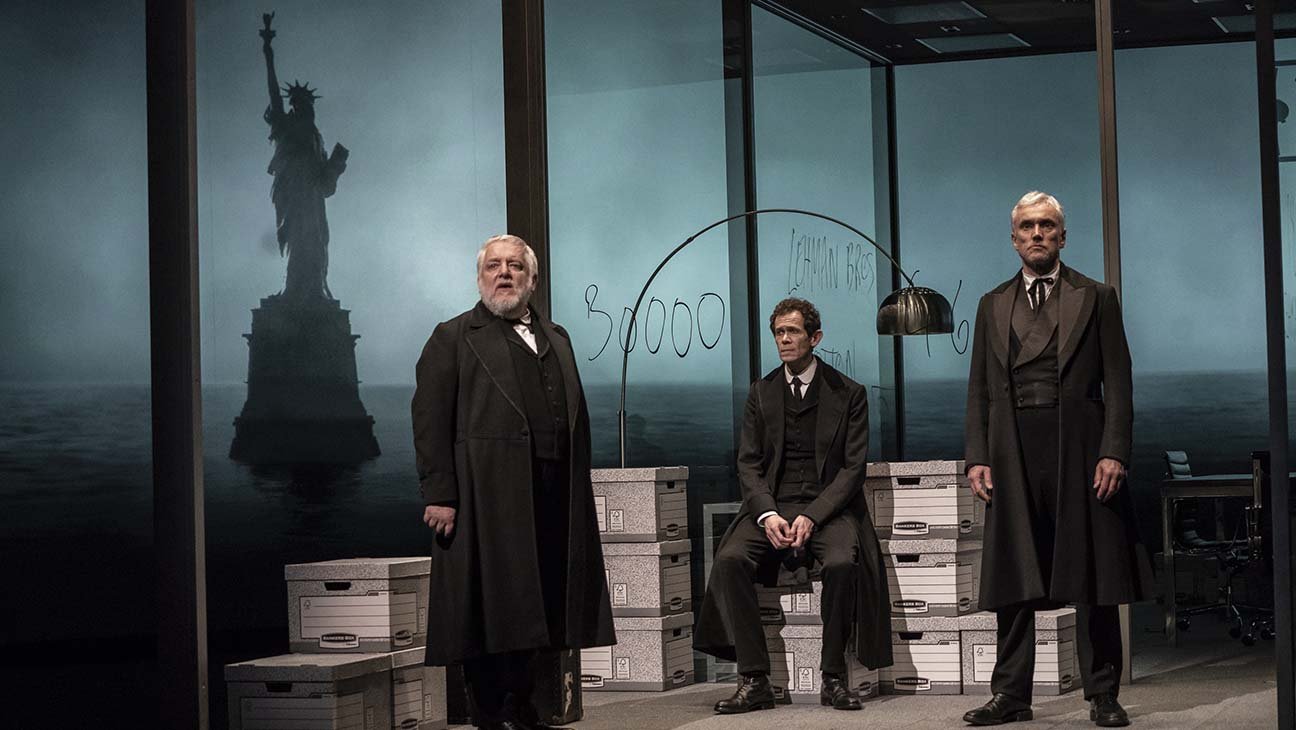 This year, Luke [Halls] gave me the script and the deliverables we used on the prior production, and I began systematically rebuilding five different states of New York's progress, with each iteration the buildings becoming taller, closer, more claustrophic and modern. By the end of the play the backdrop is a concrete and glass jungle (actually a 360-degree pano from Octane).

Building a city in Cinema 4D alone would be a mammoth task, and I suppose if I was to do it 'properly' I'd have got a matte painter to assemble mattes and do everything in Nuke. But the amazing ability to use a raft of low-poly in-fill buildings and some medium-density hero building assets meant that I was able to design something a bit more mystical. Our first approaches involved getting 3D and mapping data from Google Earth, DEM Earth (exported to 3D meshes), a very expensive model of Midtown from TurboSquid, several hero models, and the Industrial kit from Kitbash3D. But in the end, almost all of this was overkill.

As the play progresses from rural Alabama, our first glimpse of early New York is across the water, swirled in mist, distant, alluring. The buildings are low-rise industrial dockland buildings, church spires poking out behind. There are few trees.

As progress marches forward, and capitalism moulds the city ever skyward, the skyline changes dramatically. The first tall office buildings begin to dominate the manhattan skyline, but even these are superseded and dominated by the fin-de-siècle megaliths to come. The Brooklyn Bridge appears in the 1880s as a link from the old world to the modern.

Building the city from discrete assets, rather than rendered-out 2D cards, affords the ability to use several camera angles, but also helped me to visualise what kind of layout each state of NYC could look like, without having to bake out foreground, mid-ground and background mattes for each epoch. This also meant that pragmatically, I could categorise each building model to a particular year and use the Layers to make sure the buildings that were visible were not anachronistic (I failed on this account, several times) and then create a Take for each epoch with its own buildings, camera and unique assets.